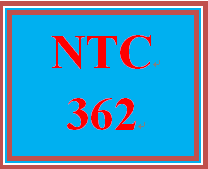 Throughout the course you have been working with improvements to the Bedford Campus and its satellite campus in Mayberry and an additional satellite. Because of your work, you have been promoted from IT networking trainee to IT networking technician. A new trainee will be starting next week and your boss has asked you to provide a training guide for the new trainee highlighting the knowledge and skills you have developed.

Using Individual and Learning Team assignments and discussions as reference, compile your guide as follows:

As a reference, compile the final network diagrams (1 page each) for all campuses with all of the improvements you and your team have made.

Create a 1- to 2-page Frequently Asked Questions (FAQ) in the form of a table in Microsoft® Word including the following questions:

Create a 14- to 16-slide Microsoft® PowerPoint® presentation, including Introduction, Conclusion, and Reference slides, that contains the following:

Note: Other applications like Adobe® Spark or Microsoft® Sway® or Mix can be used instead of PowerPoint®.

Be sure to include supportive graphics and appropriate backgrounds and styles. All references need to adhere to APA guidelines, and images should not be copied unless author permission is obtained or copyright free images are used.